Chart the expenditures by an interval of time Show information about every bill Give the possibility to export the archive in a file for backup Assume that the target audience is not English-speaking BillsManager will try to accomplish these fairly straightforward objectives. 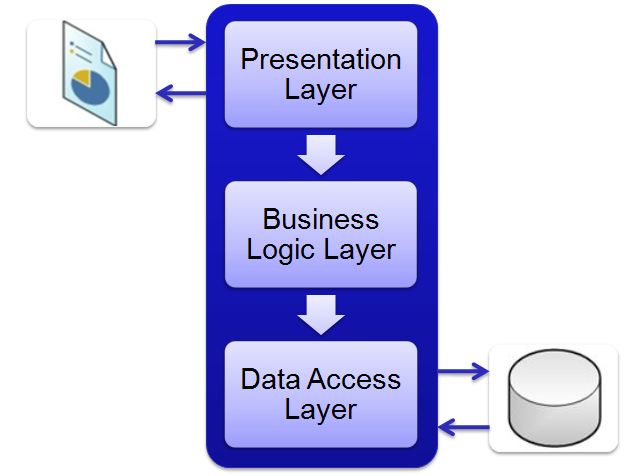 One of the most common ways to modularize an information-rich program is to separate it into three broad layers: So you often see web applications divided into a web layer that knows about handling HTTP requests and rendering HTML, a business logic layer that contains validations and calculations, and a data access layer that sorts out how to manage persistent data in a database or remote services.

On the whole I've found this to be an effective form of modularization for many applications and one that I regularly use and encourage.

It's biggest advantage for me is that it allows me to reduce the scope of my attention by allowing me to think about the three topics relatively presentation business data access layer design. When I'm working on domain logic code I can mostly ignore the UI and treat any interaction with data sources as an abstract set of functions that give me the data I need and update it as I wish.

When I'm working on the data access layer I focus on the details of wrangling the data into the form required by my interface. When I'm working on the presentation I can focus on the UI behavior, treating any data to display or update as magically appearing by function calls. By separating these elements I narrow the scope of my thinking in each piece, which makes it easier for me to follow what I need to do.

This narrowing of scope doesn't imply any sequence to programming them - I usually find I need to iterate between the layers. I might build the data and domain layers off my initial understanding of the UX, but when refining the UX I need to change the domain which necessitates a change to the data layer.

But even with that kind of cross-layer iteration, I find it easier to focus on one layer at a time as I make changes. It's similar to the switching of thinking modes you get with refactoring's two hats. Another reason to modularize is to allow me to substitute different implementations of modules.

This separation allows me to build multiple presentations on top of the same domain logic without duplicating it. Multiple presentations could be separate pages in a web app, having a web app plus mobile native apps, an API for scripting purposes, or even an old fashioned command line interface.

Modularizing the data source allows me to cope gracefully with a change in database technology, or to support services for persistence that may change with little notice. However I have to mention that while I often hear about data access substitution being a driver for separating the data source layer, I rarely hear of someone actually doing it.

Modularity also supports testability, which naturally appeals to me as a big fan of SelfTestingCode. Module boundaries expose seams that are good affordance for testing.

UI code is often tricky to test, so it's good to get as much logic as you can into a domain layer which is easily tested without having to do gymnastics to access the program through a UI [1]. Data access is often slow and awkward, so using TestDoubles around the data layer often makes domain logic testing much easier and responsive.

While substitutability and testability are certainly benefits of this layering, I must stress that even without either of these reasons I would still divide into layers like this.

Exactly how this corresponds to code depends on the programming environment we're in. Usually the lowest level is some form of subroutine or function. An object-oriented language will have a notion of class that collects functions and data structure. Most languages have some form of higher level called packages or namespaces, which often can be formed into a hierarchy.

Modules may correspond to separately deployable units: Layering can occur at any of these levels. A small program may just put separate functions for the layers into different files. A larger system may have layers corresponding to namespaces with many classes in each.Data access layer (a.k.a.

persistence layer, logging, networking, and other services which are required to support a particular business layer) The book Domain Driven Design describes some common uses for the above four layers, although its primary focus is the domain layer.

Layers Pattern in Practice. Ciumac Sergiu and how this environment can be as generic as it is possible. Separation of interfaces, business logic, and data access layer is a very important and also common need in software development.

DataGrid) will be placed in the Presentation Layer. All business logic rules will be encapsulated. A multitier architecture formalizes this decoupling by creating a business logic layer which is separate from other tiers or layers, such as the data access layer or service layer.

Each layer "knows" only a minimal amount about the code in the other layers - just enough to accomplish necessary tasks.

Figure Factory for Data Access Object strategy using Abstract Factory. the separate data access layer can be viewed as the layer that can isolate the rest of the application from the data access implementation.

This centralization makes the application easier to maintain and manage. such as the business or presentation . To be based on the 3 Tier Architecture so that the logic for the presentation layer, the business layer and the data access layer would be contained within separate components.

This architecture allows the code within any one of the layers to be changed without affecting any of the other layers. Dec 20,  · hello everyone i have got a problem i want to design business layer, data access layer, presentation layer for iridis-photo-restoration.com using C#.net, can anyone help me to.